It’s Thursday and we’ve been home for 5 days. Awake every night/morning at 3 a.m. and then not sleeping again for over 24 hours. Our bodies are WIPED OUT! Wow – who knew? We learned that the more time zones you go through, the longer the jet lag lasts, so I guess that means we’re pretty much at the max since we traveled so far. I just wish we could snap out of this. Man!! It’s wasting our whole week.
It has been nice to talk to friends and family, but still no outings (except a quick trip to the market to get some grub). Hopefully we’ll both be better by this weekend. I’m just glad we’re still on vacay time. Can’t even imagine going to work feeling like this. 😳😳😳

We leave for the airport in about a half hour.  Our dumb flight is delayed for over an hour so we have a really long wait at the Bangkok airport.  Yuck!!

Anyhow, thanks to those who commented on the blog.  We really appreciated words from home and it kept me writing so that was good too.  Hope to see you all just as soon as we catch up on sleep.  Looking forward to sharing our adventures first hand instead of through writing.  Hope you are all well and surviving the heat.

Relaxed today by the rooftop pool thinking about the trip.  As expected, K is sad to leave, but M is ecstatic.  Dreading the long flight but both of us are looking forward to some of the things at home; clean clothes, salad, English, family, pets, favorite t.v. shows, and the list goes on.

K decided to get her Naughty Boy remembrance.  It will be displayed proudly on a chain around her neck when she arrives back to the U.S.A.

3 hours until our friend, the taxi driver comes to get us.  Our flight isn’t until 2:35 in the morning so it will be a long night/day for us.

So we thought we’d splurge our last night here and at least get our toes looking good… NOT!!

You figure if the salon is in the hotel, it’s got to be somewhat nice, right?? Hahaha..not so much. Pictures show the in lady sitting on her stool doing our nails.  I also took a shot of her yellowed graduation picture from the Paul Mitchell School displayed proudly on her shelf.

She was kinda bossy with our feet and scolded us if we didn’t prop our feet correctly on her lap.  M went second and made the comment, ” I hope you don’t have toenail fungus because she didn’t wash the brush she’s using to scrub my toes!” LOL

The color selection was about 20 random bottles in her little plastic shoebox.  K chose blue, M chose a wine color.   No base coat, no cuticle work, one coat of polish & top coat and that was it.  She did pull each toe as she did a snap with her fingers.  Interesting woman and only her working there for 10 hours a day.  No a/c so she pointed one of those mini fans on us as we sat on her bench together.

Went across the street later to 7-11, yes, that’s right, they have 7-11’s here!!! About 12,000 I think the cab driver told us.  They are honestly EVERYWHERE you look.  We got some yogurt and fruit for breakfast and as we stepped outside to go back to our hotel, it was POURING rain…HARD!!.  We’ve been really lucky and haven’t had too much rain at all while we’ve been here.  Thankfully it was a short walk back to the hotel.  We snuggled in and ordered room service.  😂

Check out photos of the “salon”. 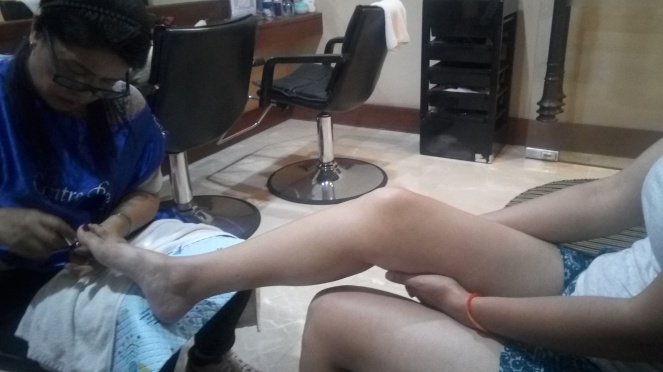 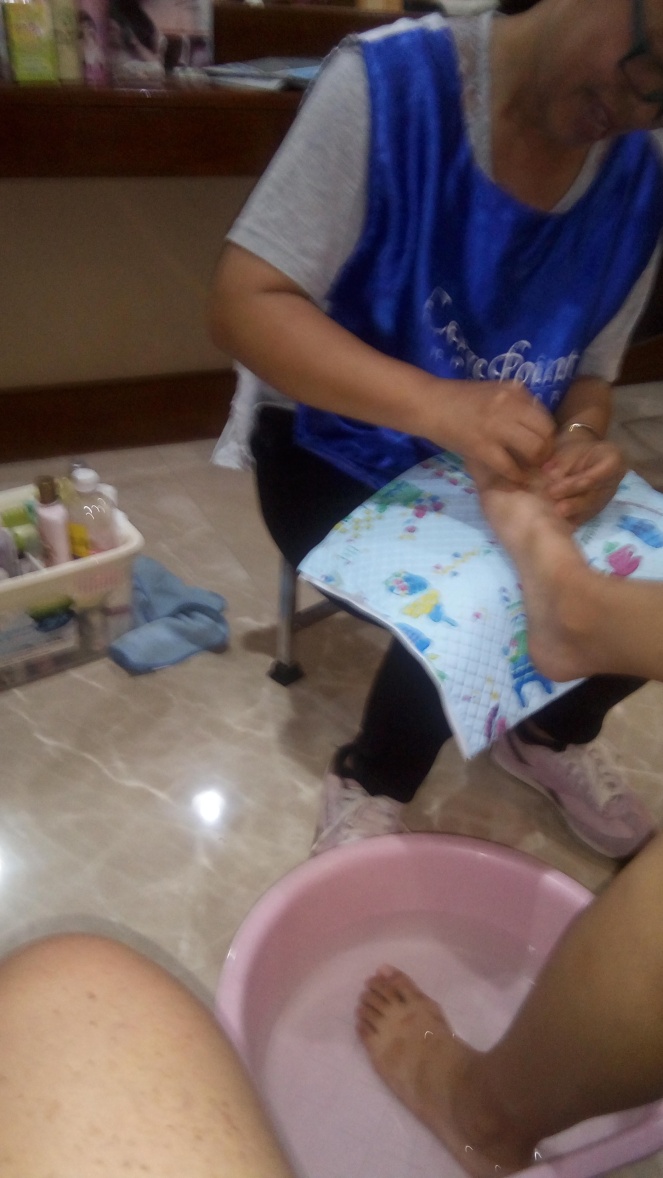 We had never heard of this guy, but he was an American largely responsible for the silk industry in Thailand.  Anyway, there is a museum made from his original house here in Bangkok so we visited there today.

You should see us now walking around this darn town like we own the place.  Hahaha!!  Check out M buying the sky train ticket from the machine.  The confidence levels are through the roof now and it’s so fun to see. 😃

The photos show the silk being extracted from the cocoons, then threaded up through the machine.  The whole process was pretty interesting.

The house was very nice and we learned that original Thai houses didn’t use nails when building their homes because they often picked up  everything and moved locations when living along the river and canals. The wood inside was dark teak and he had elements of Western design mixed with Thai. He mysteriously disappeared while vacationing in Malaysia and his sister was murdered in the states shortly after.  All very suspicious, right?

Had lunch at a street scene set up and have a pedicure appt. in about an hour at our hotel.  Its a good thing you can’t see us now.  We are so shoddy looking and burnt from all the traveling and immense amount of sweating that it’s embarrassing at how bad we look. Seriously…

We decided against a massage after reading blogs about how the women climb on top of you and practically beat you up.  We had enough of that when we got our hair shampooed in Vietnam and the foot massage in Cambodia.  We figured a pedicure would be somewhat tame.  Stay tuned though… 😒 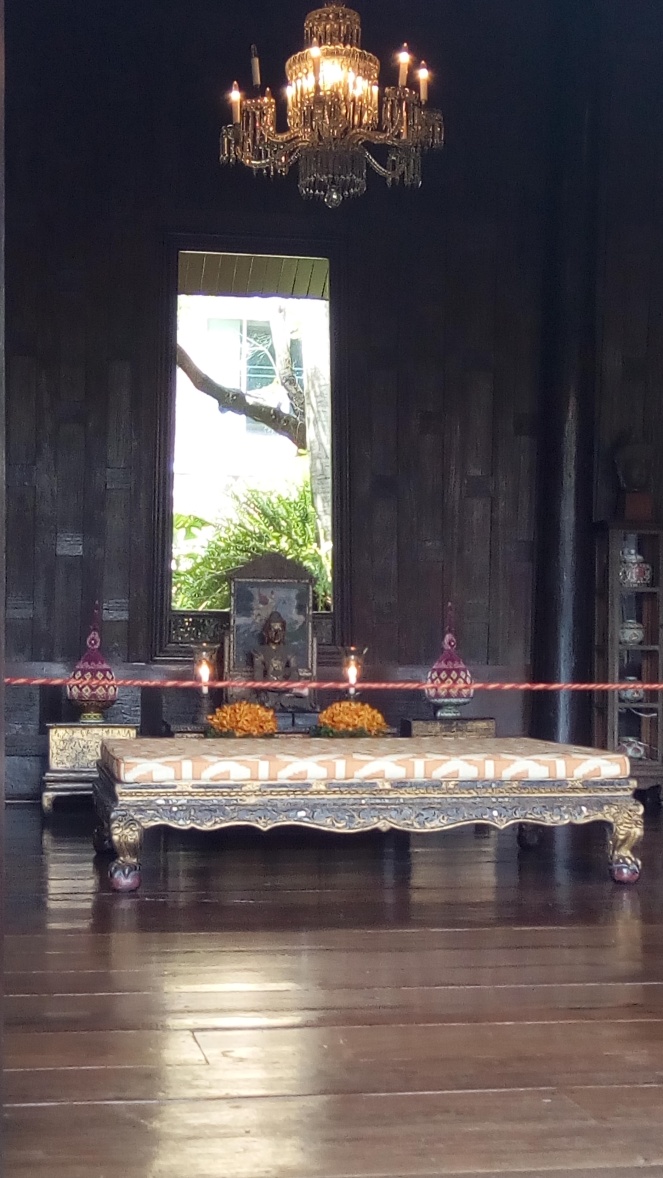 Another day of flying.  We’re getting pretty good at it by now! We finally have a room with a view.  The 18th floor! YAY!!

We met a nice taxi driver when we were here a week ago so we called him from Phuket and he picked us up this morning.  So nice to see a friendly face😊.  He’s also bringing us back to the airport for our final voyage on Friday night. 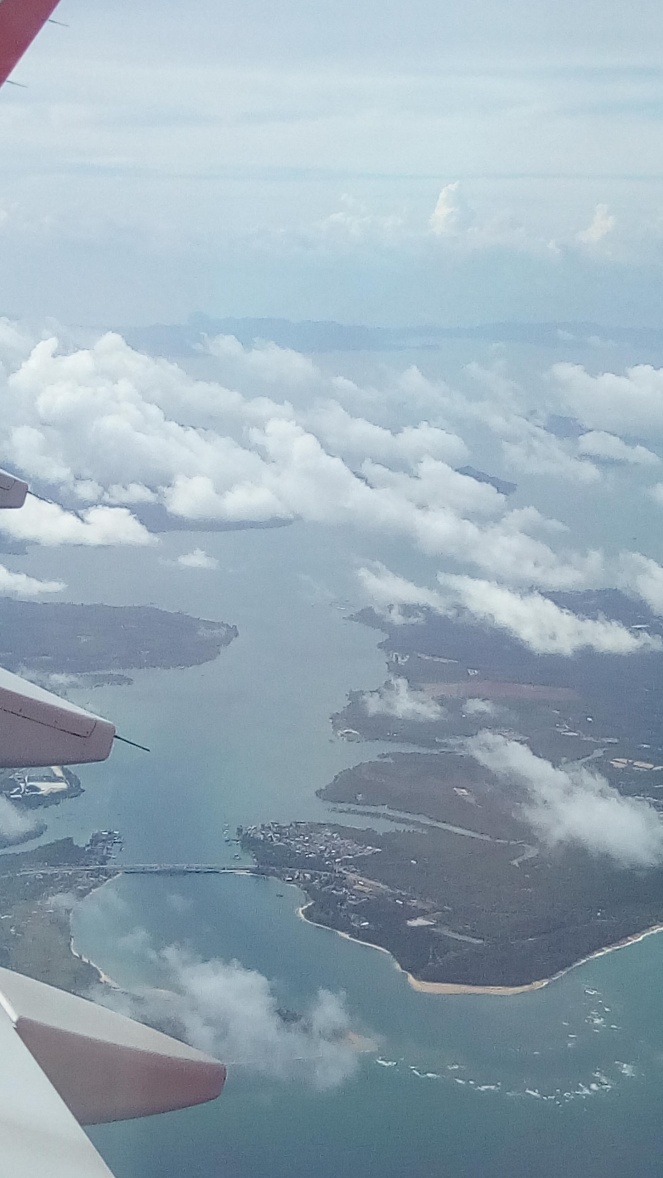 Went to some jewelry stores this afternoon since this is THE gem capital after all. K found a pendant with a “Ruby” inside but we’re doubtful if it’s genuine at such a cheap price.  And then….the perfect silver pendant… a little silver elephant that looked exactly like Naughty Boy!! Adorable! 🐾

He has really stuck with us and we think of him with fondness all the time! 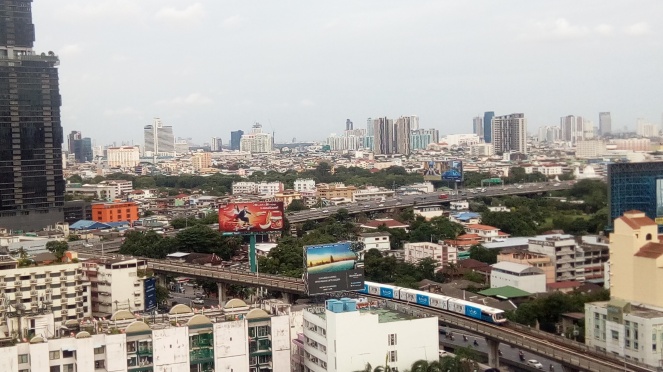 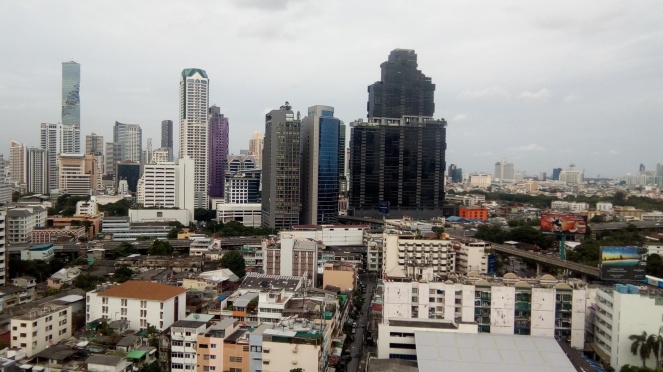 May have to go back and get that darn pendant tomorrow!!

Anyway, this is the view from our new room (& the island from the air).  Enjoy! 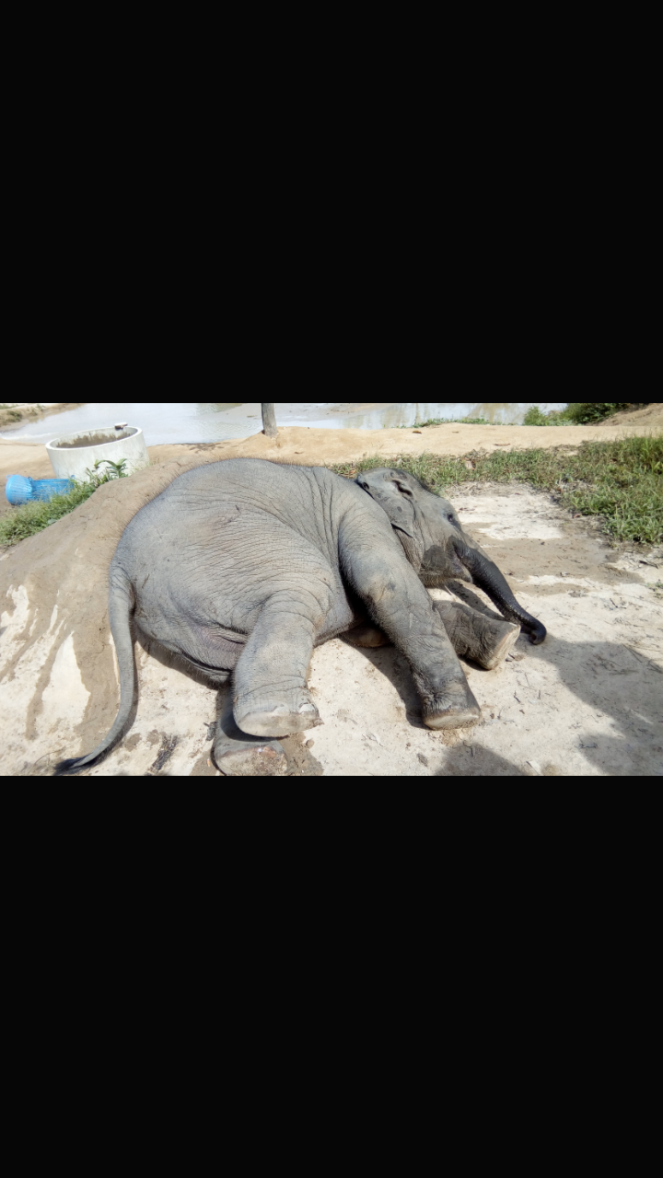 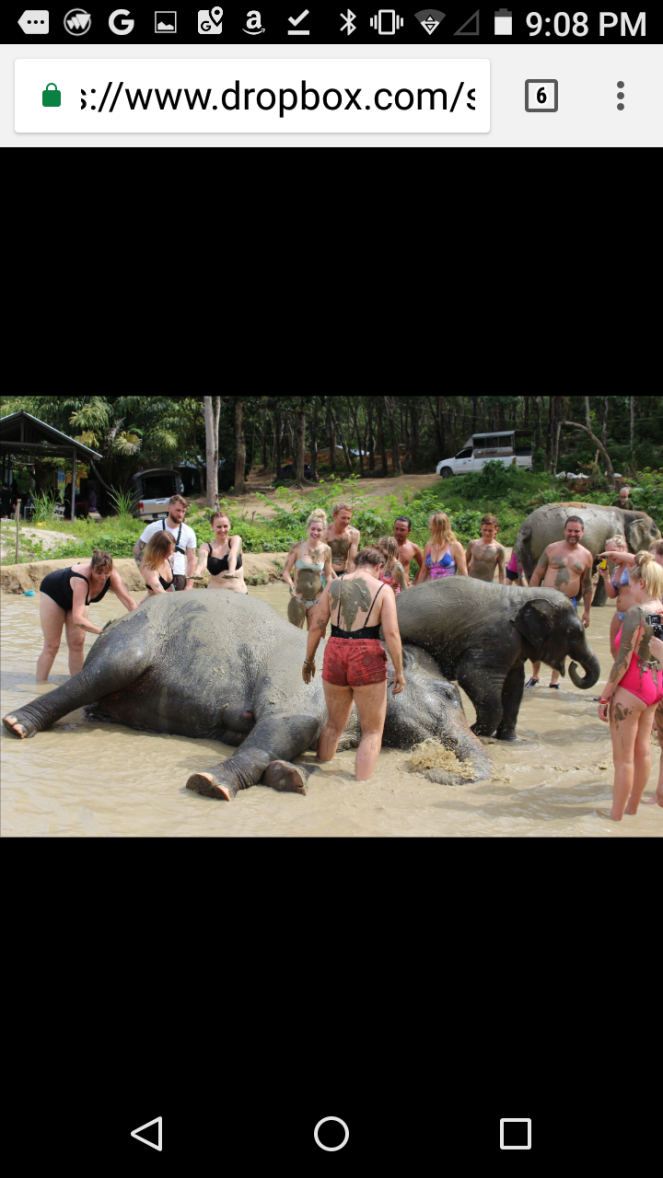 We had our misgivings about whether or not this place would be a good thing to support being as elephants are used for people’s entertainment, mistreated, etc. So, we did some research and found a place that rescues elephants from agencies that advertise trekking them on the beaches for tourists. This place seemed to be trying to do the right thing so off we went.

We pulled up and immediately saw 3 large elephants standing under some trees near a giant mud puddle and 2 others in a small pen ( a mother and her baby).  The guys fed them what looked like palm fronds and they eagerly munched it up. Aww, the baby was so cute! (for now 😉)!! They brought some bananas for us to feed them and that was ok. The baby was very interested however in anything we gave to the mom and we could tell he was a little “over anxious”.

K was standing for a picture, smiling away and that little guy got very interested in her purse.  Well…before she knew what happened, that little bugger had wrapped his trunk around the strap and started running away with it!  I don’t think you realize how much power is in those darn trunks!! K was pulled into the fence and SNAP went the strap and off he went with it.  She really thought he was going to eat the entire thing!!  The man had to jump into the pen to get it back.  See photos.😀

We found out later that that little guy was named ” Naughty Boy” and he was truly the highlight of the whole day.  He was causing trouble, running away from  the guys, playing tag, grabbing the water hose, and just causing mischief everywhere ( but in a playful way). He kept us laughing for hours afterwards.  When the guys led him down to the mud baths, he said, “Here comes trouble” and he wasn’t lying☺!!  Once they let all the elephants out, we were free to touch, feed, stroke, kiss and play with them at our leisure.

They are beautiful, incredible animals.

We gave them mud baths, brushed them, fed them, rinsed them off and just spent the day with them. It was something well never forget.

Not sure what order the pics will be in on this site, but one shows Naughty Boy all cute and sweet with Mom.  Another shows his trunk starting to wrap around the strap (unbeknownst to K), and the rest are just what our day looked like.  One if the elephants was 54 years old and you can probably see the age. 😔 They were all so special and it was a magical day…

(Pictures on next post. Apparently, I can’t figure this out tonight!! Grrrr…

*Side note:. M was surprised to find out how much pee could come out of an elephant and pondered whether or not mud bathing with these elephants was still a good idea. As she was pondering this, K said, “Don’t look that way”, of course M did so and saw a guide catch some of the poop coming out of another elephant in his hands and flung it to the side.  Exciting times!! 💩💩

This is a text widget, which allows you to add text or HTML to your sidebar. You can use them to display text, links, images, HTML, or a combination of these. Edit them in the Widget section of the Customizer.
Asia Here We Come!
Blog at WordPress.com.
Loading Comments...